Specifically designed for non-engineers, this course is an introduction to the world of modern IP telecommunications at a high level and covering a wide range of topics. It's a first pass at the topics, explaining the fundamental ideas, equipment and technologies, jargon, the services that are sold, where the money is, the players, and how it all fits together. We'll cover broadband, convergence, the network core, network protocols, network access, services, equipment and how carrier networks interconnect. In subsequent courses, we'll drill deeper into key topics like VoIP, Wireless, PSTN, network protocols: Ethernet, IP and MPLS. 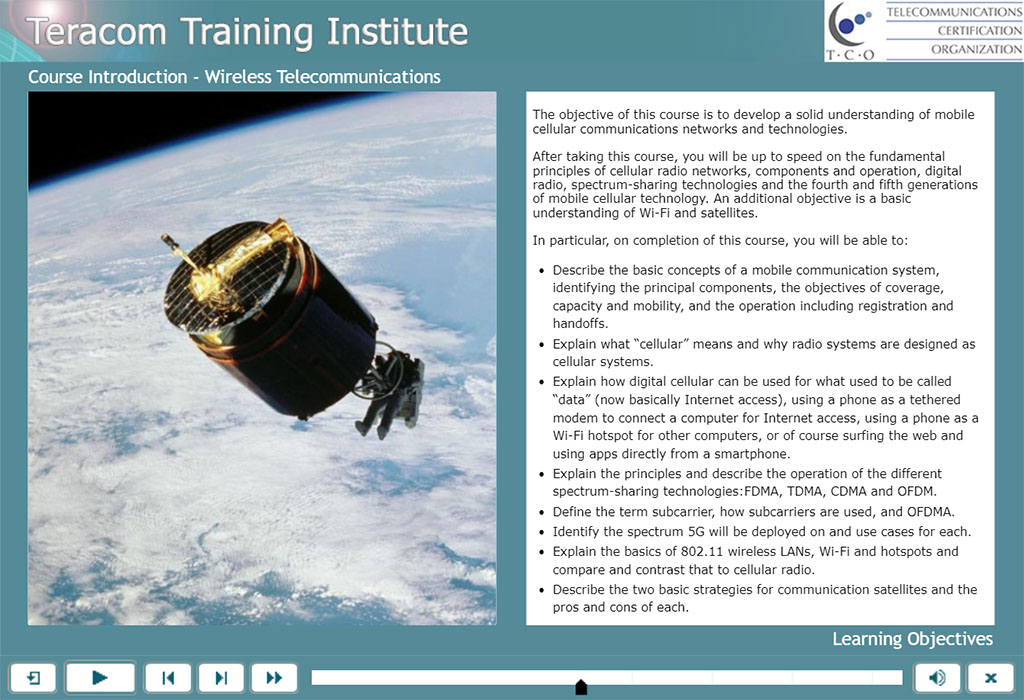 This is an up-to-date and comprehensive course on Wi-Fi, Cellular and Satellites covering fundamental principles of mobility, cellular and radio; mobilie phone calls, digital radio, and mobile Internet access; network components and operation; and OFDMA spectrum-sharing technology for 4G LTE and 5G; standards for Wi-Fi; and satellite communications. We begin with the terminology and basic concepts such as cellular radio, digital radio, base stations and transceivers, handoffs, mobile switches and backhaul. Then, we review spectrum-sharing technologies and their variations in chronological order: FDMA for first generation, GSM/TDMA for second generation, and CDMA for third generation. We'll explain the OFDMA spectrum-sharing method for 4G LTE and 5G used to dynamically assign subcarrier(s) to users and how bits are represented on subcarriers by modems. This is followed by a lesson on Wi-Fi, or more specifically, 802.11 wireless LANs and Wi-Fi 6, and a lesson on satellite communications including Iridium Next and Starlink. On completion, you will be able to draw a model of a cellular wireless telecommunications network, identify all of its components and technologies from handset to mobile switch, and explain the characteristics and operation of FDMA, TDMA, CDMA and OFDMA. You will also be able to explain Wi-Fi, the frequencies used and the different 802.11 standards, and the similarities and differences between LEO and GEO satellites.

This course is an introduction to everything VoIP. We'll cover the fundamental principles and ideas of a Voice over IP telephone system, VoIP, SIP and the all the jargon ‐ what it means and how it works. We'll cover related and supporting technologies such as Ethernet MAC frames, video over IP and codecs; and the equipment involved in phone calls on a modern broadband converged IP telecommunications network. We conclude with a discussion on the future: Broadband IP Dial Tone where the telephone network and the Internet will be the same thing. 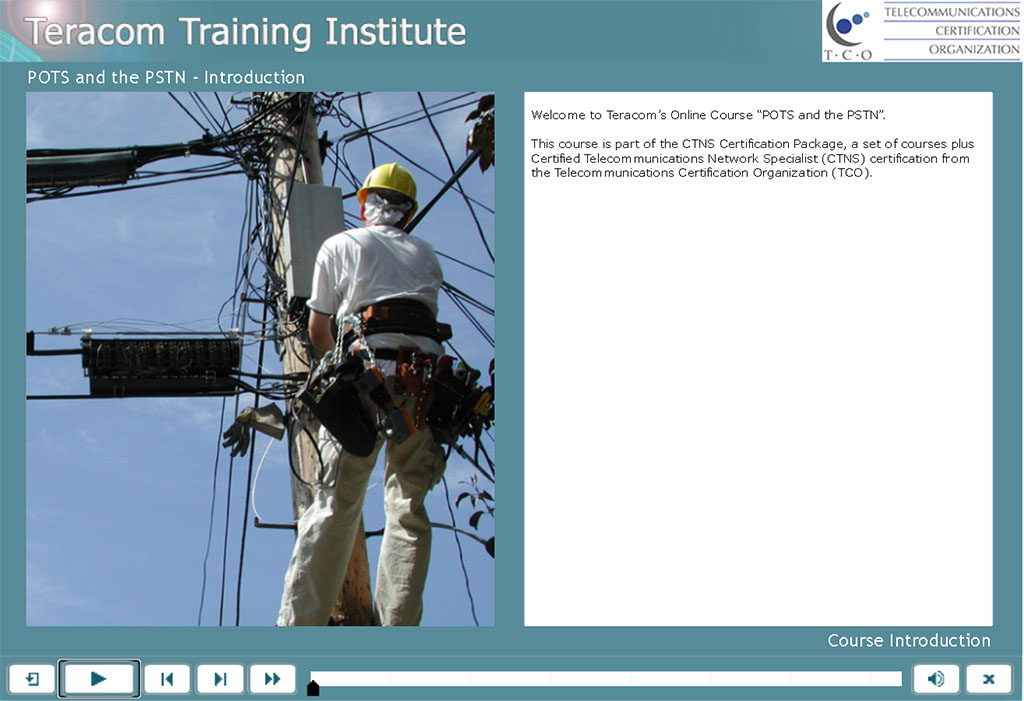 We begin with the history understanding why and how telephone companies and networks are organized for local access and inter-city transmission, that is LECs, Local Exchange Carriers, and IXCs, Inter-Exchange Carriers. Then we will describe the basic model for the PSTN to understand its main components: Central Office, Customer Premise, loop, attenuation, loop length, outside plant, remotes, trunk, circuit switching, and why this is still essential knowledge even though we are shifting to VoIP. Next, we'll cover Plain Ordinary Telephone Service and aspects of telephony including twisted pair, the voiceband, analog, supervision and signaling including DTMF. The course finishes with an explanation of the SS7 control system for the telephone network used in the US and Canada. After completing this course, you'll be able to identify all of the components and technologies of the PSTN, draw a model of the PSTN, and explain its core-and-edge architecture. 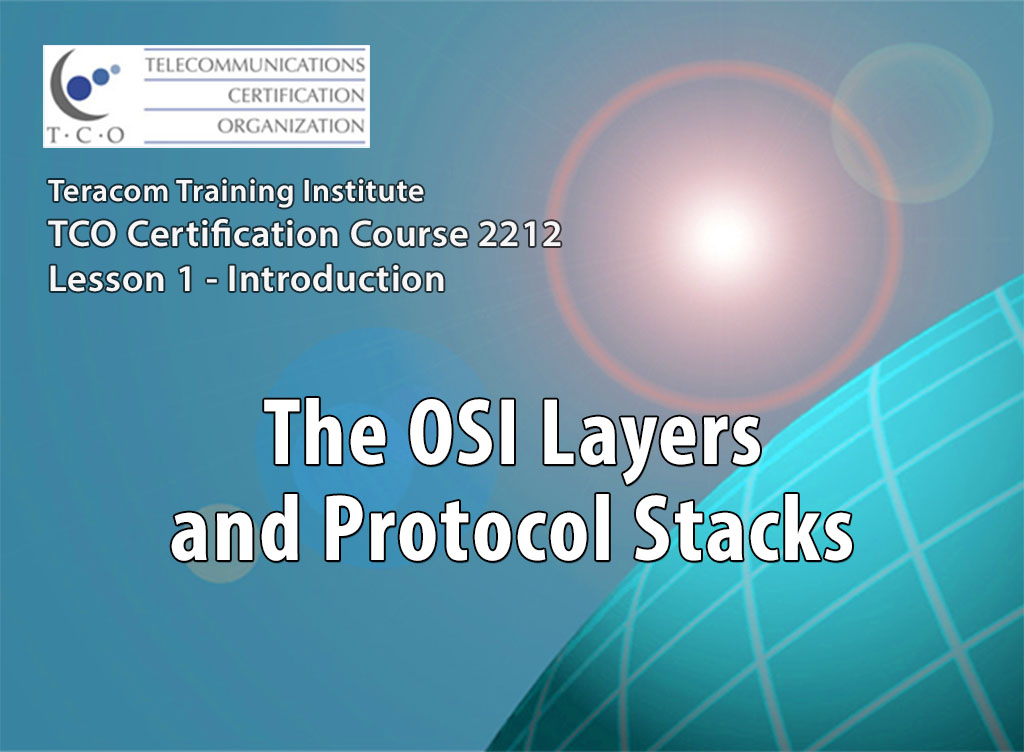 This course is the first in the set of 4 "networking courses" in the CTNS, Certified Telecommunications Network Specialist package. It establishes a framework, used for all of the subsequent discussions, which is the OSI 7-Layer Reference Model. This framework allows us to organize the many functions performed so that we can discuss the issues separately. It defines groups of functions called layers. To begin, we'll define "protocol" in comparison to a standard. Next, we'll define "layer" and provide an overview of each of the seven layers, its name, purpose and function; and how a layered architecture operates. Then, we'll go back in more detail with one lesson for each layer, examining the functions to be performed, and giving examples of where and how the various protocols are used in the implementation of particular layers. The result is one protocol on top of another on top of another, creating a protocol stack, to fulfill the required functions. To make this easier to understand, we finish with the famous FedEx Analogy which illustrates the concepts using a company-to-company communication, and an analogy of Babushka dolls which illustrate how, at the bits level, the protocol headers are nested. Upon completion of this course, you'll be able to define a protocol as differentiate from a standard, explain why we require a layered architecture, name the 7 layers of the OSI model describing the purpose and functions of each, explain how a protocol stack works and where protocol headers are located.

This course is all about Ethernet which is the equivalent of physically connecting two devices. We cover the fundamentals, the equipment and implementations including wireless and fiber, twisted-pair copper cables, MANs, PONs, in a building and in the network core. We'll begin by defining "broadcast domain" and its first implementation over a bus cable. We'll explain LAN interfaces, how each has a hard-coded MAC address, and, since all stations in a broadcast domain receive all MAC frames, how the address field is used to determine who a MAC frame is for. We'll learn how the bus in now inside the Ethernet switch, also called a LAN switch or Layer 2 switch, how the LAN switch knows the MAC address for the stations, and how the MAC frames are forwarded by the LAN switch to one or more stations. You'll learn how broadcast domains defined in software are called VLANs and can be used to separate traffic by work area and device type at the enterprise level or by customer at the carrier level. Then we'll cover the IEEE 802.3 standards and the evolution of Ethernet from 10BASE-5 to 1000BASE-T on LAN cables and the TIA-568 cable categories, and Wi-Fi certification and 802.11 wireless LANs. We'll finish with a lesson on Optical Ethernet which is Ethernet on fiber and the basis of the telecom network today. You'll learn about how bits are represented, underground installation of fiber cables and fiber splicing used to connect bulk fiber and equipment. On completion, you will be able to define a broadcast domain, explain Ethernet and the 802 standards, MAC addresses, LANs, VLANs, and Optical Ethernet, the jargon and buzzwords, the underlying ideas, and how it all works together to move data between two devices in the same broadcast domain.

Course L2213 IP Networks, Routers and Addresses – which could also be titled "Layer 3".

IP Packets • Networks • Routers • Static and Dynamic Addresses • Public and Private Addresses • DHCP • NAT • IPv6
11 interactive multipart lessons, multiple-choice exam and certificate. Produced 2020.
This is a comprehensive course on the Network Layer, Layer 3 of the OSI Model, concentrating on IP packet networks. We begin with the two basic principles of packet networks: bandwidth on demand, also known as overbooking or statistical multiplexing; and packet-switching, also known as packet forwarding or routing. We'll understand how packet switching is used by routers to implement the network by relaying packets between circuits, how routers are a control point for security on the network, the content of a routing table, and the term "Customer Edge". Then we'll cover IP addresses: IPv4 address classes, static addresses, dynamic addresses and DHCP, dotted-decimal notation, public addresses, private addresses and Network Address Translation, plus an overview of IPv6, IPv6 address allocation and assignment. On completion of this course, you will be able to define bandwidth on demand and its advantages, what a router does, the basic structure of a routing table, where routers are located, define the IPv4 address structure and dotted-decimal notation, explain how both static and dynamic addresses are assigned using DHCP, what private addresses are and how they are interfaced to the public IP network, the structure, allocation and assignment of IPv6 addresses and end up understanding how IPv6 subnets will be assigned to broadcast domains and 18 billion billion addresses per residence.

Carrier Packet Networks • Technologies • SLAs • CoS • MPLS • MPLS VPNs • Integration & Aggregation
11 interactive multipart lessons, multiple-choice exam and certificate. Produced 2020.
This is an up-to-date and comprehensive course devoted to the structure, components and operation of carrier packet networks, built and operated by companies such as AT&T, how they are implemented, how customers connect and the services offered. The IP packet and routing story explained in the previous course will now be applied at the carrier network level by replacing dedicated lines with a bandwidth on demand service provided by a carrier between customer locations. Much of this course explains virtual circuits, a powerful tool used for traffic management, implemented with MPLS, and how MPLS can be used to implement convergence, offer differentiated services and aggregate traffic. The course is completed with a lesson on "MPLS service", and how that compares to Internet service. On completion of this course, you will understand carrier packet networks and service, be able to define the terms Customer Edge and Provider Edge, explain what a traffic profile is and how that relates to a Service Level Agreement, the purpose, components, terminology and operation of MPLS and MPLS for business customers, and how MPLS can be used to implement integration or convergence, aggregation and differentiated classes of service – what people mean when they say "MPLS service" and its pros and cons compared to Internet service.

Get started today to make this invaluable addition to your knowledge and skills!